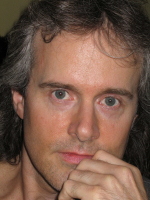 Kyle James Stevens was born in Dallas, Texas and grew up in Jackson Mississippi.  He returned to Dallas after graduating from college to establish his professional career as an artist.   He moved to Brooklyn, NY in 1987 to attend the Art Students League in New York City, studying with such well known artists as David Leffel and Nelson Shanks. Kyle and his wife moved to Memmingen Germany in 2016 where they currently reside.

Kyle has produced an extensive amount of oil paintings and drawings with representation in top galleries throughout the United States. He has been featured in national publications, including "American Artist Magazine" and "The Artist's Magazine” and has won prestigious national awards.

The style in which Kyle paints and draws is directly influenced by the 17th century Old Masters, such as Velasquez, Ribera, Vermeer and Rembrandt. He masterfully implements the use of "chiaroscuro" lighting characteristic of the Baroque style of this period.  Of all the great masters, Rembrandt has had the most impact on Kyle’s style of painting. Kyle’s artwork portrays his discipline to adhere to the principles of his classical training and his knowledge of the materials involved in the craft of oil painting.

Kyle's paintings and drawings incorporate figurative, still life and portraiture. Mythology and religious themes now have a place in his repertoire which infuses the figure and his imagination. Timeless themes, such as "Beauty and the Beast,” allow Kyle to explore his own personal symbolic concepts while maintaining the consistent structure of the Old Dutch Masters' style. Pushing the envelope on religious themes allows for a personal and passionate exploration beyond ideology. It is the concept and the way light moves over and across forms, submerging and emerging from shadows, that has become Kyle’s language and resonates throughout his artwork.

©2019 Kyle James Stevens  Unauthorized use or reproduction of the images and or text on this website is prohibited. ﻿﻿